Published by Graham VanDusen on January 21, 2018

DIY Whitetail founder Graham VanDusen embarked on a Kansas public land hunt in 2017. Check out the following article to read exactly how he tagged a mature 140″ Kansas 10 point. It is sure to be full of extremely useful information.

My 2017 “rutcation” was one that I will remember for the rest of my life. Not only was it the first buck that I killed in Kansas ( in 3 years of attempts), but it was my biggest buck to date in 10 years of bow hunting. For me, my 2017 “rutcation” to Kansas was very important. I had been to Kansas twice before and could not seal the deal. I had plenty of close encounters, but it seemed that luck was not on my side. For instance in 2016, I was hunting a cedar island surrounded by a very marshy area in Southern Kansas; I set up on the ground with the wind in my face expecting the bucks to come back to bed in the cedars from the adjacent bean fields. It seemed like a perfect set up. 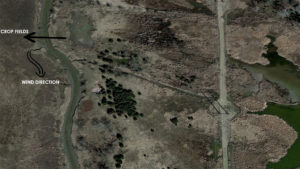 I set up on the north tip of the cedar island hoping the deer would come from the west and walk right past me. That morning I had an encounter with a 150″ plus 8 point. He did what I was thinking he would, but instead of coming straight in to the bedding area, he hooked down wind to check it first. When he made his J hook(something I didn’t know about at the time) he circled behind me and entered the bedding area. Somehow he did not smell me and came to bed on the northern tip of the cedars, exactly where I was sitting. He walked to the other side of cedar bush next to me and laid down. It was incredible. Except there was absolutely no way for me to get a shot on this animal because the cedars were too thick. about 10 minutes later I guess the wind swirled and he busted me. It was an amazing experience, but somehow I managed to be within 10 yards of a giant buck and couldn’t shoot him. Talk about bad luck.

My hunts in 2015/2016 were full of encounters like that one. I just could not close the deal. So 2017 was a big year for me, and because of my previous bad luck I had started to doubt my self and put a lot of pressure on my hunt in 2017. That was a mistake. Because 3 days into my 2017 hunt I called my wife and told her I was thinking about cutting my trip short and just giving up. Luckily she convinced me to stay, and what ensued after that phone call lead to me killing the best buck I have ever killed.

My strategy in 2017 was very simple. I used what worked for me best in my previous years and decided to focus on that strategy. My plan was to hunt overlooked/hard to get to areas where I suspect deer will bed and observe those areas from afar then move in on what I see. To do this I needed to be extremely mobile. So I spent most of the year before this hunt improving my mobile set ups. The only thing that would hurt this strategy is not to observe anything, and that is exactly what happened to me on the first 6 days of this hunt. It seemed like I could never get where  I wanted to be, to see what I wanted to see. Then when I finally got set up each day I wasn’t seeing many deer at all. It was a terrible 6 days of hunting, and I was starting to get very down about my chances.

On day 7 of my hunt the pressure on the area I was hunting really picked up. So I made a gut decision to just leave that unit of Kansas and go back to the area where I had the encounter in 2016, 3 hours away. Best decision I ever made. I arrived at my new area with about 1 hour of daylight remaining. When I got there I decided that I would drive around and scout where all the other hunters were. To my surprise there was only 1 hunter on the entire area, and I saw 2 shooter bucks with does in open CRP Fields. Finally some luck.

Friday Nov 10th was a cold, windy, and darn near perfect day to deer hunt. It started out cloudy, but by 10:00 am the clouds moved out and the sun came out to warm my bones. On the morning of Nov. 10th I decided I would sit on the transition of a thick timbered bedding area and an open CRP field. I was set up a good hour before daylight, and that was the first time the entire trip that I actually felt good about a set up. 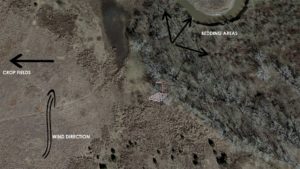 I set my stand in this location for observation purposes. I could see a good distance in front of my stand and I was hoping to witness how the deer returned from their feeding  and entered their bedding areas. My plan, for once, worked like a charm. That morning I saw 2 mature bucks (one of them a double drop time 8 point), 3-4 young bucks, and around 5 does. The area was hot, does were in estrus, bucks were running around everywhere. It was perfect. While observing the deer behavior in the area, I noticed that the Kansas Department of Wildlife had mowed some areas in the CRP for the pheasant hunters. Anywhere they mowed there was green grass/weeds/clovers growing and the deer were feeding on it as they transitioned to and from bedding. The only issue was there were no trees around that area to hunt. So I decided that in the afternoon I would get very aggressive and set up on the ground with a buck decoy in the mowed area.

Around noon I climbed down from my stand and walked back to the truck to eat some lunch and grab my Montana Buck Silhouette Decoy. After eating my lunch and making my final plans I began walking back to the area where I would make my ambush. The majority of this CRP was anywhere from waist to head high. I found an area of taller grass and weeds for my hideout. I set up about 10 yards off of the mowed area. To shoot into the mowed area I stomped down a path of grass about one yard wide, and I placed the decoy about 20 yards in front of me just to the right of the shooting lane. 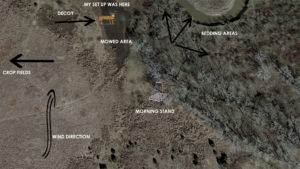 By the time I had everything all set up it was around 2:30. It is hard to explain the feeling I had in my gut for this hunt. It was my next to last day of the hunt, time was running out, and I was feeling the pressure. It was one of those 98% nervous, 2% excited or vise versa situations. I knew that the deer weren’t far from me (bedded around 100 yards away), and I knew they would stage in this area. What I didn’t know is how they would react to the decoy. Previous to this  hunt I had 2-3 very good encounters with a decoy and that is what lead me to deciding to use the decoy, but I still had this feeling that I am either going to kill a buck or I am going to scare every deer to the next county.

At approximately 4:30 pm I caught a glance of a good 8 point about 60 yards in front of me. He was a shooter for sure. I grunted at him and he began the slow “drunk walk'” towards my decoy. It was all panning out just perfectly. When he got to around 30 yards I heard some rustling behind me. It was a doe. I was busted. The doe blew and both deer bounded away across the hill and out of sight. If it wasn’t for that doe I would have killed that 8 point for sure. I was livid to say the least. I thought my chances were over. As I sat there stooping and pouting like a 6 year old I caught something out of the corner of my eye. ANTLERS! BIG ANTLERS! He was about 50 yards away, and he was going the wrong direction. So I gave him a grunt to get his attention toward the decoy. He stopped and looked my direction, but he did not turn around. I could tell he was curious so I decided to throw out a snort-weeze. That really peaked his interest, and quite frankly I think it made him mad! He turned my way and the hunt was on. It took him about a minute to close the distance and everything was working out perfectly.

I drew my bow when he was about 30 yards away because he sill couldn’t see me. When he stepped in to my shooting lane he was still slightly quartering at me and I really wanted a broadside or quartering away shot. I was hoping he would circle the decoy and when he turned it would present the shot I needed. However, when he finally got within 5 yards of the decoy he figured it out. The jig was up. I was busted again. He jumped back, turned to look at me, blew at me, then bounded. But wait, he only took one big bound. He still wasn’t sure and he wanted to take one more look at me and the decoy. When he stopped to turn around and check us out one last time he was at 25 yards and quartering away. I settled the pin, released the trigger, and let the arrow fly. The arrow hit just behind his rib cage and settled in the opposite shoulder of the mature deer. Perfect shot. Double lungs.

Since the arrow did not exit the other side there wasn’t any blood. It was getting dark so I decided I would just come back the next morning and not risk potentially spooking him if the shot wasn’t as good as I thought. The next morning I walked out the the spot and within 10 minutes I had my hands on a mature Kansas 10 point. I fell to my knees in joy. I had finally killed my public land trophy. I didn’t even care that I was going to have to roll this thing on my cart about a mile back to the truck. I finally did it. My plan finally came together. I felt complete.

Click this link to watch the video of my hunt. 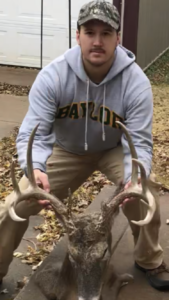 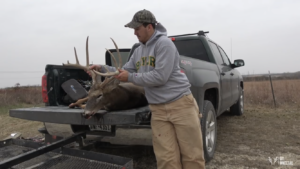